Do you have one for me? Entering The Gambia

Little did we know when we ate it but breakfast at Keur Thierry was our last bread and jam breakfast. Something we had moaned and joked about the whole way from Morocco. I never thought I’d miss it!

It only took us about 30minutes to ride to Karang, the border town between Senegal and The Gambia but the second we arrived we were pounced on by a group of Gambian women. They were keen to show us where to go so that they could persuade us to change money with them. When surrounded by a group of basically rude people, the last thing we wanted to do was use their services and we hadn’t worked out before hand what a good rate was anyway. We’d been warned that pick pocketing was high on this particular border (not sure why this should be worse than others?) so David went off with the paper work to sort out official number 1 while I waited with the bikes. I was now surrounded by a group of dirty kids wanting money, of course. They were actually quite entertaining playing and teasing each other which I was amused at watching.

The funny thing about the border crossings that we had encountered was that it was never obvious where you had to go, for what paper work and once again, relied on others in the queue to point us in the right direction.

The next official guy we needed to see was customs. There seemed to be a few different customs guys who needed to see our bike papers but each time our papers were in order and they were happy. We sat down in a smartish looking office but before we’d hardly spoken, a guy wearing an ‘official tour guide’ shirt stormed in with papers and a disagreement broke out. It was hard to know what was happening but clearly manners didn’t come into it! Once he had left and our papers were being looked at a man outside passed a cup of tea through the window to the official guy which Louise made sounds of wanting. It was handed straight to Louise and she sat enjoying a cup of freshly brewed African tea.

Everything was hand written in a book titled ‘arrivals reg’ written in blue biro. I’d love to know how often their official registers are looked at!

The guy’s first question to us was to find out if it was our first time in The Gambia and when we said it was he replied ‘You’re very welcome’. The official guys were incredibly proud to be Gambian and were pleased we had chosen to visit their country. All of this, of course happened in English which was music to Louise’s ears!

The next question, like always was ‘what is your profession’. When David said he was a lawyer (it was the easiest response and caused no questioning) the response was ‘oh chief justice’. Errr, how do you respond to that? His next comment was about our motorbike jackets. He has a motorbike himself (well, a 125cc) and said he really needed a good jacket to stop the wind and dust; ‘maybe you should leave your jacket behind for me’…

Next came customs who we were expecting would want to check our bags, double check them and possibly search through the contents once more. We experienced the opposite. The guy was friendly, asked what we had and was happy to accept the answer, then gave us the signed forms and asked for 300Dalasis for each bike. Thinking about it now, I’m pretty sure that wasn’t an official cost. He had a very relaxed friendly manner and handing money over seemed normal. We never received a receipt and wish we’d questioned it! He told us the next guy would need 100D per bike…we weren’t asked for money by anyone else…just as we were finishing with customs, an unobviously uniformed man appeared asking to see our yellow fever vaccination card. It’s a requirement to have the vaccination if you’ve travelled from a country where you could have picked the disease up. We showed our certificates and went on to the last guy for our final passport stamp.

As we rode into the border area; it really is just a large area with a kind of official border but nothing like what we are used to when crossing from England to France for example, there was a sign that said ‘Welcome to The Gambia’ which Louise was determined to have a photo next to before we crossed through. Officials are funny about photos at border crossings so Louise suggested she’d ride near the sign, then once in position, David would follow, Louise would quickly take the photo and we’d be on our way. The second Louise rode back towards the sign, a number of policemen and people near by ran after her beckoning her in the right direction!! We never did get a photo with the sign.

Into The Gambia we rode and it looked surprisingly like Senegal. The road was tarmac with sand and dust surrounding the edges, the trees were lush, baobabs could be seen along the way and women walked along with bundles of produce on their heads.

We came across the first Gambian police check of the day. The first guy came over and said ‘BMW, be my wife’ which at this point we hadn’t heard before. Louise laughed, then he said, ‘maybe you should leave it behind for me’.. Hahaha, while this was happening the lady police women told David she liked his Mercedes Benz high vis vest and said she needed one like it. We gave the policemen one of our badges as a gift on the condition Louise could take a photo of him! 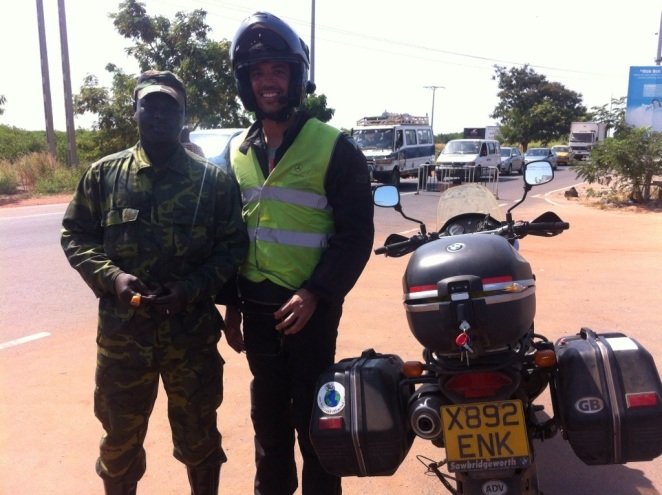 We needed to buy our tickets for the ferry to Banjul but the ticket office had a computer failure which meant picking them at the ferry terminal instead.

As we approached the craziness of Barra, we headed over to the ferry and Louise went off to buy the tickets. People pushed and shoved to get to the hole in the wall where the tickets were bought. With 10D notes in their hands, it was a case of push your arm through the gap and the women behind would swap the money for a ferry ticket. Great, try fighting this mob with heavy motorbike kit on and with no idea how much our tickets would cost. Used to this type of fight while trying to get on a 343 bus at Elephant and Castle back home, Louise sharpened her elbows and gave as good as she got. Manners went out the window and after managing to actually get to the window she came away with two passenger tickets and a ticket for each bike. David in the mean time was busy with locals asking about the bikes, trying to sell him things and kids trying to sell their tour guide expertise. 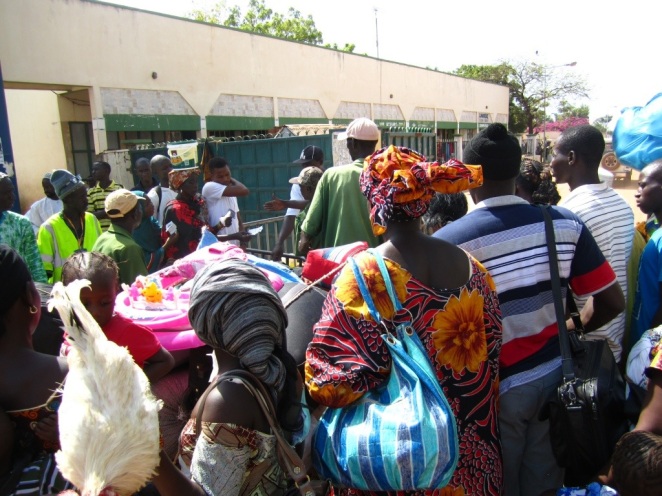 We didn’t have to wait long for the ferry but of course it took a while to load up. We had to wait with the carts along the side while cars and trucks rode on. 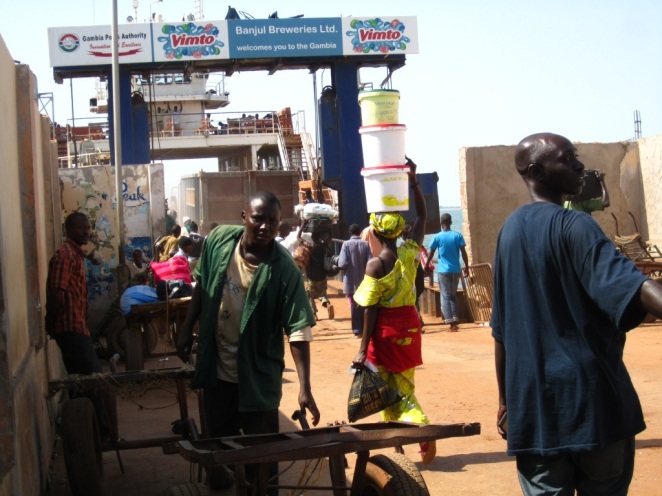 A guy came over to say hello and Louise was instantly amused to see he was wearing an ‘Only Fools and Horses’ tshirt. She had totally fallen for his trick. The Brits love it. Luckily the policemen moved him on…

When we finally boarded, our bikes were wedged into a gap amongst the other vehicles. This was pretty helpful considering there was no means of strapping the bikes down!

We walked up to the deck to find some shade and revealed our sweat soaked tshirts from under our jackets. We were the only white faces around but no one seemed remotely bothered by us. Over the next hour we watched women walk through the crowds selling peanuts, bags of ice drinks and cakes, women breast feeding, guys sleeping on gravel on top of trucks and women trying to create shade by tying their shawls to the broken wire gratings.

The car in front of our bikes was full of policemen who were fascinated by the bikes. Of course they asked for the bikes. We had two bikes, therefore we could leave one behind, right? This was becoming tiring and we’d been here less than one day!

We left the ferry to a large ‘Welcome to Banjul’ sign and entered Banjul through muddy dirt roads and then a piste until we joined the main road to Bakau. 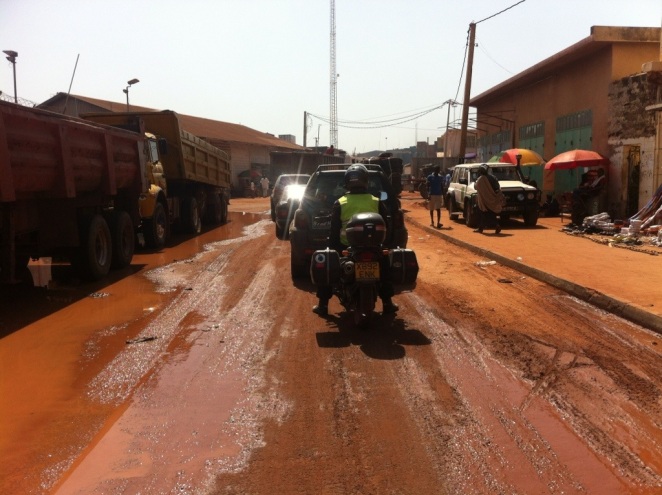 We were at our final destination, Banjul, The Gambia.