After 650km and 8 police and gendarmerie road checks we finally made it to Dakhla. The checks are a constant reminder that we are in disputed territory. But we have a good routine going on. Louise rides in the front and when she takes her helmet off, gives them an enthusiastic “bonjour!” They then look at me and ask for our passports; I say she’s the boss and she carries them both. Then I show them the sticker with our route outline on my windscreen and say that we’re going to Banjul “inch’allah”. This makes us look friendly and has eased the procedure. That being said we have found people in Western Sahara very nice!

As we were crossing the city of Laayoune (which is very clean and modern) we heard fun fire and thought “uh oh”… Only to realise they came from men in robes on beautifully decorated horses. It then became quickly obvious that this was a celebration. We were immediately swarmed by a crowd of young people with Moroccan flags and pictures of the king. They were celebrating the Green March (a mass demonstration in November 1975, coordinated by the Moroccan government, to force Spain to hand over the disputed, autonomous semi-metropolitan Spanish Province of Sahara to Morocco). They all wanted to have they’re pictures taken with us and we were happy to abide. This level of enthusiasm was contrasted later by a petrol station attendant who, when he saw our stickers which mention “western Sahara” said to me discreetly in English “yes, this is Western Sahara, not Morocco!”. 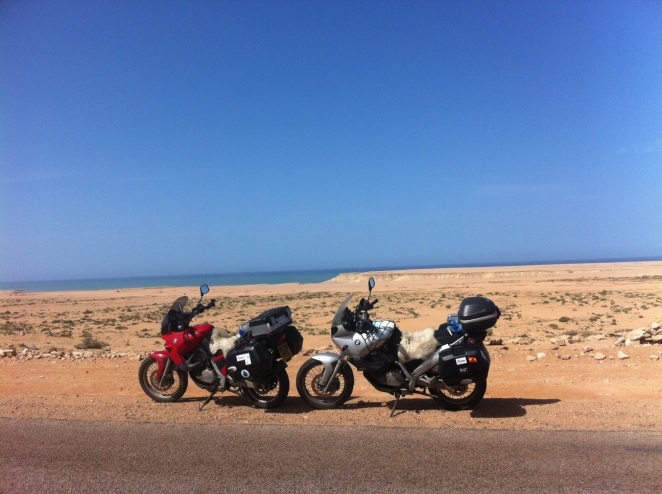 We entered the sandy peninsula of Dakhla to be greeted by an amazing orange sun setting on the white sand dunes. The timing couldn’t have been more perfect!