We made it to the ferry to Spain! We were up bright and early with little sleep due to the excitement. As luck goes we had an electrical problem in the bathroom last night…but why bother right?

We were lucky to avoid the rain that was predicted for today. But it seems it’ll catch up with us in Madrid.

With 10 days left before we head out South it was time to have our bikes checked over one last time by a professional. Although we trust our bikes it makes sense to have full confidence in them. We do like to get our hands dirty, as a matter of fact we serviced the bikes a few weeks back but we’re not qualified enough to check valve clearances…

So off we were, bright and early to bring the bikes to our local mechanic, Chas Bikes in Kennington. Chas runs his bike garage with a philosophy we really appreciate. He will always make sure his mechanics don’t do unnecessary work but will also give good, balanced advice on what needs to be done. He’s also keen to help and has shown a lot of interest in our trip. This morning Louise got him chatting a bit and it turns out he’s had his share of adventures himself; he was born in Africa and lived there for many years, working at some point as a ranger in Idi Amin’s Uganda. He also drove a car all the way to Beijing!

Louise shared her family’s history in Uganda and promised to bring back pictures of elephants in Murchison Falls, where Chas had worked on an elephant conservation project 30 years ago.

As we arrived at the garage though my bike died on me… same as last night in pouring rain. The problem is a short-circuit which made the fuse blow, not a big deal but it needs to be sorted out. I suspect it has something to do with the amateur wiring I’ve done to link the auxiliary power point… mea culpa.

After a short, agitated night sleep the alarm clock rang at 6am. We were up in a matter of minutes, excited about the weekend ahead. None of that drifting in and out of sleep, eyelids glued together behaviour that usually characterizes Monday to Fridays…The panniers liners were packed and ready in the hallway and the biking gear neatly laid out in the guest room. 30 minutes later we were on our bikes and ready to hit the road.

The plan was simple. Blast out of London, enter “Chirac’s 200mph a*s*h*le” at Folkestone and from Calais enjoy a nice ride on small coastal roads to our place on the Belgian seaside. The Sunday would see us ride to Bruges, be tourists for an afternoon and head back to London. Getting out of London was uneventful, if only very quiet and therefore less painful than usual. It is when we hit the M20 that the ride became splendid. Although we were on a boring motorway, we were surrounded by beautiful countryside covered in low fog and heading straight towards a fluorescent orange sunrise. Beautiful; we were in the “zone”.

We had covered about 40 miles and had another 20 to go when the W650 broke down… at 70mph on the middle lane of the M20… ouch! We managed to pull over and quickly discovered that the tank was empty. Pff! Well done us! Everything had been carefully planned except for fuel. I will digress here and complain about the W650 (blame the bike not the rider); I love the whole retro look Kawasaki was going for and they did a great job, but no fuel gauge? Really?? Not even a low fuel warning light?? To be fair, you’d have thought that after 4 such occasions in 6 months of ownership we would be more careful but nope, not wired this way… Anyway, we decided to adopt a positive attitude and walked about a mile back to a petrol station where we filled a jerry can. The whole operation only delayed us by about 30 minutes and we managed to get on the following train. The shuttle is very good like that with bikes, you just show up when you want, regardless of your reservation and they’ll put you on the next available train.

We got out on the other side of the channel to find the kind of fog Europeans always associate with London. The visibility could not have been more than 500 meters. We rode on b-roads from Calais to Dunkirk. This part of France is very….French. It’s amazing how a narrow stretch of water can make such a difference. 30 minutes away from Folkestone we were now riding through quaint French villages with people queuing in front of the local “boucherie”, older gentlemen with berets and Peugeots with those yellow front lights from the 80s. 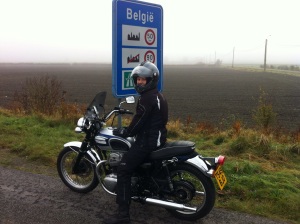 In Dunkirk we made a little detour to ride a road I had spotted on Google Maps; the Route de la Digue du Braek, essentially a narrow road on an artificial sandbank about 2 miles long. On one side was the Channel, on the other the port of Dunkirk. In the middle sand patches. This is a very unusual and beautiful road and I would recommend it to anyone who rides in the area. We arrived in time for lunch in Oostduinkerke where we parked the bikes in the underground garage. We met up with Lucie and Karim, friends from Brussels who came up to spend some time with us and went for a long, foggy walk on the beach. We had a great time catching up and filling up on Belgian beers and moules-frites.

Sunday morning was radiant. The sun was finally out and the views of the sea were fantastic. W

e rode the 25 miles to Bruges following canals and carving through the infamous fields of Flanders. Bruges was the way I remembered it; incredibly pretty and full of chocolate. We played tourists for the afternoon and then headed back to London. This time we took the E40 highway to Calais because we were short on time and it was getting dark anyway. This time though, we were riding into a beautiful fluorescent orange sunset; a fitting end to our 48 hour weekend trip to Belgium. 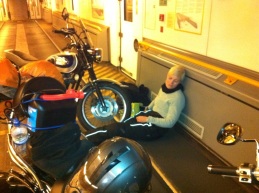