Unexpected deluvial rain forced us to spend 36hours in Azrou. On our way there, as we were climbing and gaining altitude we entered the worst fog I’ve ever seen and then into a deluge. The visibility was so bad that we didn’t see the “St. Hubert” vista point I was keen to have my picture taken at. We were soaked through and through when we reached Hotel Salam. It was so cold and damp that we had to find a laundrette to dry our clothes. Even that didn’t help much…

We decided not to leave Azrou the next day because it was still pouring. Instead we spent our time drinking coffees and mint tea at the cafe where they had wifi. We were invited to tea at Mohamed’s, a local mountain guide. It was fascinating to see how him and his family lived in their traditional house in the medina. The first thing that struck me was how nice and warm it was! The thick walls of their old house kept warmth in in the winter and out in the summer. Why don’t we build like this anymore? No need for heating… Mohamed also showed us the lamb he had slaughtered the day before. It was skinned and dry, hanging in the kitchen. One leg was already missing as it was to be the dinner. We were told of how, on the day of Eid, Muslims do not eat the meat of the animal. Instead they make skewers with the fat and liver and steam the brain which they eat with onions and tomatoes. The meat is to be eaten with friends and families during the next week.

On Saturday we finally departed and were not unhappy to see the back of Azrou. I’m sure it’s very pretty in the sunshine but its a bit bleak in the rain! The heavy rains had made off-roading impossible so, after seeing Barbary Apes in the Cedar Forest, we headed south towards Khenifra and were met by beautiful sunshine. We spotted a couple with a BMW GS Adventure with a Horizons Unlimited sticker on the side of the road and stopped for a chat. Nigel and Sharon were on a month tour of Morocco and funnily enough had been at the same HUBB meeting in Ripley in July! As a matter of fact they had been speakers, presenting their trip to Nordkapp in Norway.

After some friendly chat, some pictures and a promise to see each other at the next meeting we continued on a B road towards Boujad. Here we crossed rolling hills bordered by mountains in the distance. The landscape had changed a lot since the alpine air of Azrou. We were now in a much more arid section which reminded Louise of Arizona.

The colour palette was provided by the dry yellow hills, the white clouds and the royal blue sky. We crossed many Oueds (river beds) which must had been rivers only days ago; the mud and puddles were a good indication that it had rained here too. We both agreed that it was one o our best days riding so far. The roads were made for dual sports bikes, the landscape was spectacular and the locals very friendly, as always. We found a hotel in Oued Zem where we were told that we wouldn’t find any restaurant open because of Eid. In rural parts of the country Eid is celebrated for longer. We therefore went straight to the Souk and bought supplies of bread, cheese and tomatoes for dinner in the hotel room. We did participate in the local evening event though, which is to walk around the park and pond, while seeing and being seen.

Louise made a quick calculation and we spent 270Dhm (£19) on food and accommodation today, that’s way below our daily budget and shows that Morocco can be enjoyed on a shoestring if you wish to. 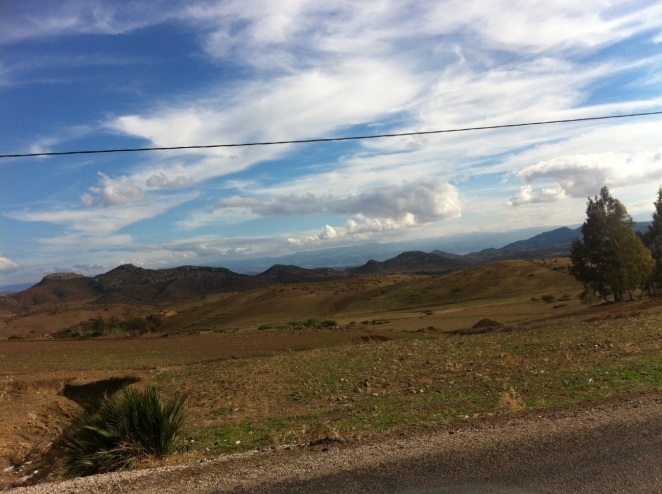 One thought on “Global warming”