The ride from Santander to Madrid was fairly uneventfull despite the cold temperatures and the rain. Who knew Spain could be as bad as the uk? That being said, the landscape and the Spanish road signs gave us a sense of being well and truly on our adventure. After 400km, just after entering Madrid through its northern doors, Louise’s bike wouldn’t start anymore. I guess the Roxter heated grips which had already given us trouble in the past were the culprit. The battery was totally dead. We tried push starting the bike, jump starting it too but to no avail. All of a sudden a police car arrived and out of it came the two most friendly police officers I have ever come across. They helped up push the bike to a safe parking place. One of them told me that his friend was on a bike trip around the world and gave me his website www.sinewan.com .

We locked the bike and put Louise and her luggage in a taxi , direction Laura’s. I followed with my bike until, 200m away from our destination I my bike refused to engage into gear! How is this possible? Both bikes broken down a couple of km apart! After all the preparation and the planning we couldn’t have planned this…

In our misfortune we were actually lucky. The bikes had carried us reliably to our destination before giving in. From here it was easy for us to find a mechanic that took them both in for some TLC. We’re just glad it didn’t happen in the middle of nowhere. Twice in one day. We also met great people who went out of their ways to help us. It was their way to contribute to the success of our adventure.

We found a local mechanic (hugo bikes) whose employees did all they could to sort us out quickly and efficiently. We did come across some “mañana mañana” but to be fair, after our friends William and Laura called them a few times to check they delivered on their promise. Big thanks to the mechanics who made it happen! Muchas Gracias a los mecanicos de Hugo Bikes!

So here’s the damages; we’re delayed 24 hours. But who could complain that we “had” to stay a little longer in this great city in the company of our good friends!?

Tomorrow we head down south and will stay in Granada with a view to cross into Morocco on Monday. 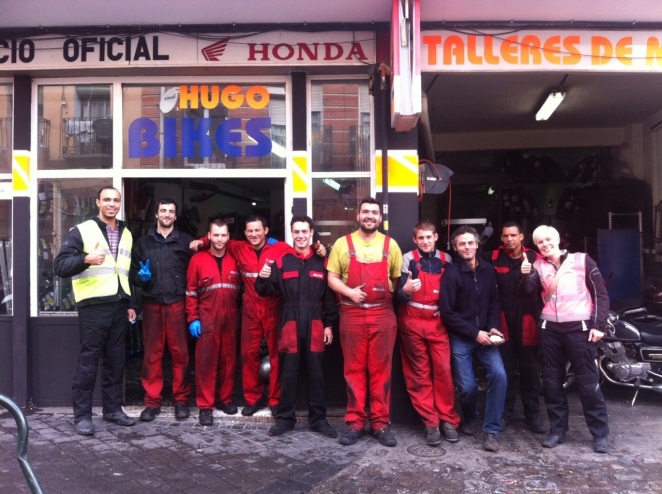